Most people know what rust is – that reddish coating that forms when unprotected steel is exposed to aggressive environmental influences. According to the World Corrosion Organization (WCO), rust costs Germany around 3 percent of its annual gross domestic product (GDP).* That is nearly EUR 100 billion in 2017 figures. A good reason to invest in corrosion protection.

Corrosion - what is that, actually?

If you want to apply corrosion protection to your steel products, you should first understand what corrosion actually is. The term “corrosion” is derived from the Latin verb “corrodere,” which means “to decompose” or “to eat away.” In the technical sense (DIN EN ISO 8044), it is a change in a mostly metallic material that impairs the function of a component or an entire system. The best-known type of corrosion is the (red) rust mentioned above. It results from oxidation, i.e. the chemical reaction of iron and oxygen, and forms a red layer on the metal. The outer layer of the metal absorbs oxygen. This leads to an increase in the volume of the material and finally to the flaking of the surface layer. This process continues, eats into the material over time and decomposes it. This weakens the affected component.

What happens during the corrosion process?

Three basics are necessary for the metallic corrosion process to take place:

Let us imagine as an example a component made of iron with drops of water on it.

In the electrochemical voltage series of the elements, iron has a higher, positive potential compared to water. Therefore, the positive ions (cations) of iron migrate through the electrolyte water (Figure 1). The oxygen diffuses from the outside into the water droplets and takes over the electron transport as an oxidizing agent. An anodic region (plus pole) and a cathodic region (minus pole) are formed. This creates a potential difference similar to that in a battery. A so-called galvanic cell is formed in which a redox reaction, i.e. an electron transfer, takes place. The iron transforms into iron oxide or colloquially into rust (red elements in Figure 1). This is the most stable form of iron and occurs most frequently in nature. 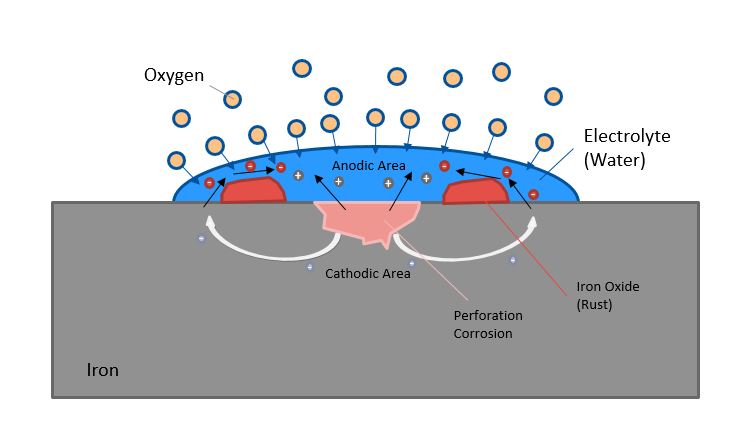 How to prevent corrosion

The formation of rust can be reduced by inserting a separating layer between the iron in the steel on one side and the electrolyte and oxygen on the other. A frequently used method for such corrosion protection is zinc plating of steel. Zinc has a negative standard potential of -0.76 volts, which is below the standard potential of iron (Figure 2). Zinc is therefore a less noble metal than iron. The corrosion first attacks the zinc layer and removes it before the iron. The less noble layer – zinc in this case – is also called the “sacrificial layer.” As a rule, the less noble metal always rusts first.

NORMA Group’s metal products, such as worm drive hose clamps, pipe couplings and other joining products, are used in a wide variety of regions, situations and applications. High corrosion resistance is very often indispensable. In automobiles, our products not only have to withstand vibrations while driving, temperature fluctuations caused by the engine or weather conditions and pressure loads from the system, they have to be corrosion-resistant too. Aggressive influences such as splash water, dirt or road salt in the winter also favor and accelerate the formation of corrosion.

To overcome these challenges, we test our products for corrosion resistance at regular intervals in a so-called salt spray test. This test exposes products to an aggressive salty mist and examines them at regular intervals for red rust formation. Depending on the material or material combinations used, the test specimens must withstand certain periods of time in the salt spray chamber without red rust.