In mid-March, my colleagues and I were suddenly forced to work from home due to the corona pandemic. For me as a working student, this transition posed a great challenge at first. I wondered whether my other fellow employees felt the same way. So, in April I asked several fellow employees about their first experiences.

It was mid-March when the pandemic reached Germany and most of the employees at the German sites were sent to work from their homes. As a working student who works two days a week, the sudden change was unfamiliar to me at first and also a bit strange. I wondered how my colleagues fared. I shared my personal experiences via our in-house social network Yammer and asked them about their first impressions of working from home. The amount of feedback was overwhelming. NORMA Group employees from all over the world shared pictures of their workplace with me. I didn't even know most of them personally yet and now I got a very personal insight into their private workplaces.

A pandemic, a Yammer post and many different workplaces: My colleagues were happy to share pictures and gain insights into their co-workers’ new work day.

Through the pictures I learned exciting details about my colleagues’ professions and hobbies, which I would probably never have known otherwise. Some of them are interior design lovers, illustrators, gamers, art lovers and Star Wars fans. I also learned how my colleagues integrated their workplaces into their homes and that, in the end, we all faced similar challenges and fears. Despite the uncertainty of not knowing what the coming weeks and months would bring, we all made the best of the situation. We adapted to the “New Normal” and individually found the best solutions for ourselves. In the process, we all learned a lot of new things. 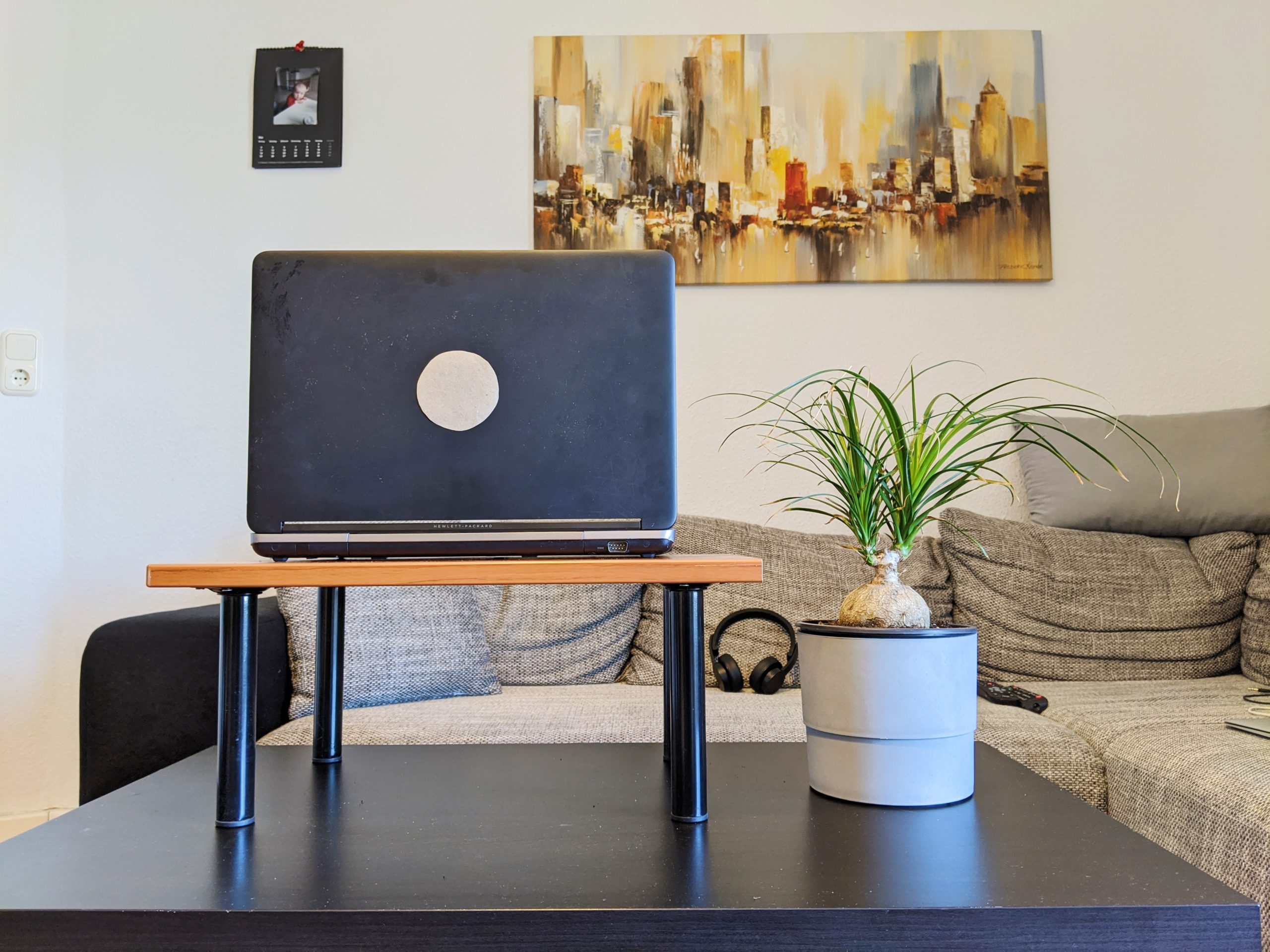 My first workplace in my home office

Today we live in a new normality, the “New Normal.” Although we still don’t know what the future will bring, however, we feel a little more secure and prepared. After exchanging ideas with many colleagues worldwide in April, I contacted some of them again six months later. I spoke with Jennie Lundin, Operation Excellence Leader in Sweden; Jason Quek, Regional Learning & Development Manager in Singapore; Carolina Piñeiro, Service Desk Team Leader & Knowledge Manager in Poland and Andreas Schäfer, ICT Director Infrastructure & Operations in Germany.

From one day to the next in mobile working

At the beginning, the situation was very strange for everyone because nobody knew what would happen. Jennie Lundin remembers exactly when everything suddenly started: “On Monday afternoon of March 16, we were asked to take our work equipment home, if possible, and to not return to the office for the time being. It was a very strange situation when we packed all our work items and left the office without knowing when we would see each other again,” she says.

Carolina Piñeiro and Andreas Schäfer work in the area of IT services. They and their colleagues were responsible for ensuring that the spontaneous move of a large part of the workforce to mobile working went smoothly, as they had developed a contingency plan in good time. “When it all started in China, we began preparing for the worst-case scenario. Although we didn’t think it would come to that,” explains Andreas Schäfer. “Thanks to good preparations, all of the necessary new standards could be implemented quickly,” he adds. “March was definitely one of the most difficult months for us. Never before have we had to help so many employees at once. I think we definitely set a record there,” Carolina Piñeiro explains.

Communicating efficiently with colleagues from home is easier than expected 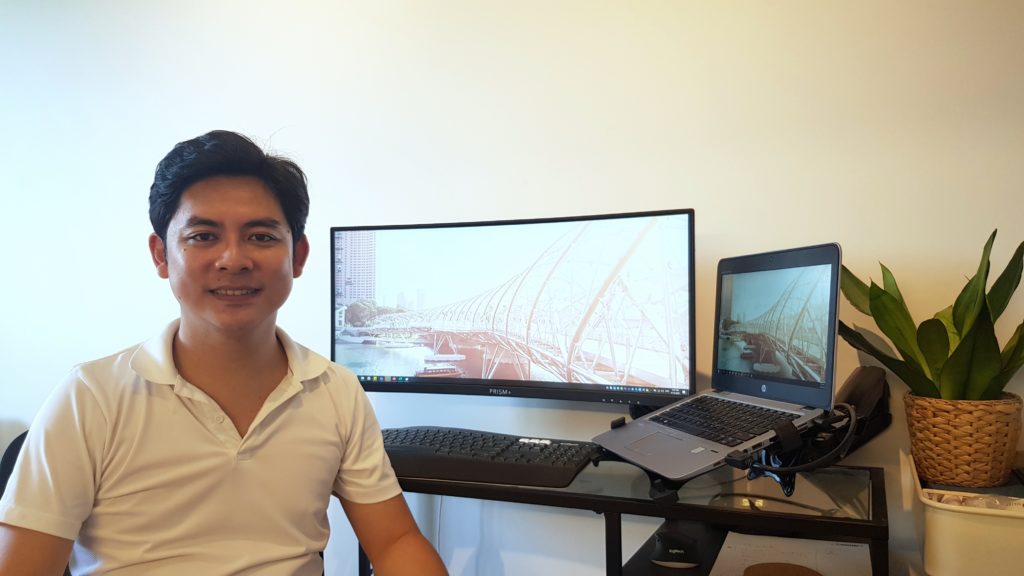 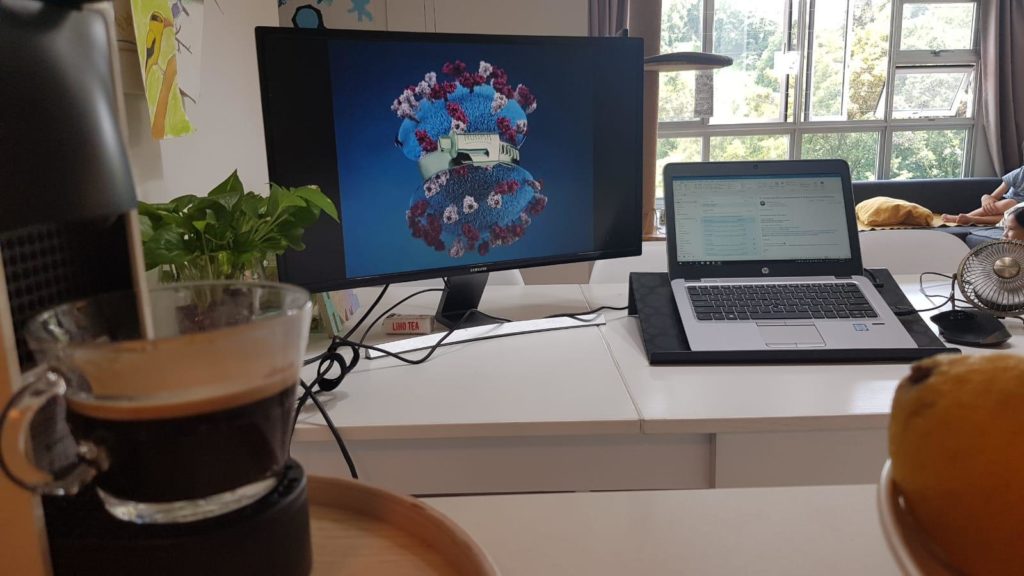 Jason Quek reported on the challenges in employee communication

The initial phase of adapting was the easy part for Jason Quek, as maintaining a positive mindset and focus was tougher. As Regional Learning & Development Manager, he facilitates employee learning & development programs and processes to support employee development & growth. “Amidst problems and challenges, regular and open virtual communication with supervisors and colleagues helped us all to contain our feelings of fear and negative thoughts,” says Jason.

The lockdown showed me personally that the exchange with colleagues, friends and families remains human thanks to digital communication. My first video conference might have taken some getting used to at the beginning, but now I’m so familiar with it that I can’t even imagine a working day without video telephony. “I can still remember when everyone put on their nice-looking shirts and elegant blouses at the beginning,” Andreas Schäfer recalls, laughing. “Today we all wear mostly casual T-shirts and let our little roommates make a quick camera appearance. We have all gotten a little closer to each other over this.” 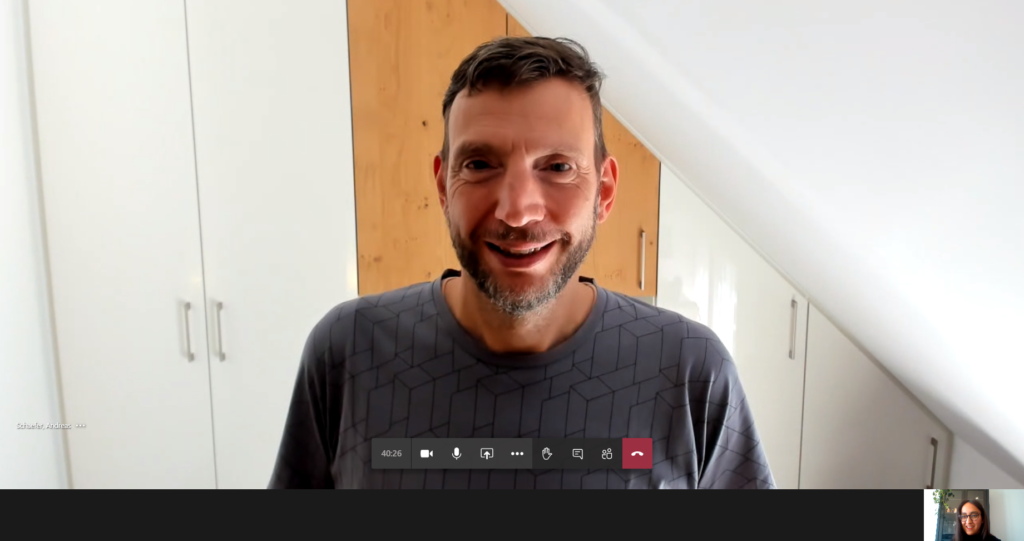 While talking with Andreas Schäfer, we discussed life in the countryside during the corona pandemic, how important teamwork is and our appreciation of casual fashion at work.

More empathy was shown in the working environment than ever before

Not all employees had the best working conditions at home and everyone was aware of this. Some didn’t have a separate work room or even had to work from their coffee table. Many had to look after their children at the same time and even had to school them. Still others had to survive the lockdowns alone. The situation showed us all how important and easy it is to be there for colleagues, friends and family. Sometimes it helps a lot just to exchange cooking tips or recipes, to talk for five minutes at a video meeting about plans for the upcoming weekend or to share stories about buying toilet paper during lockdown. 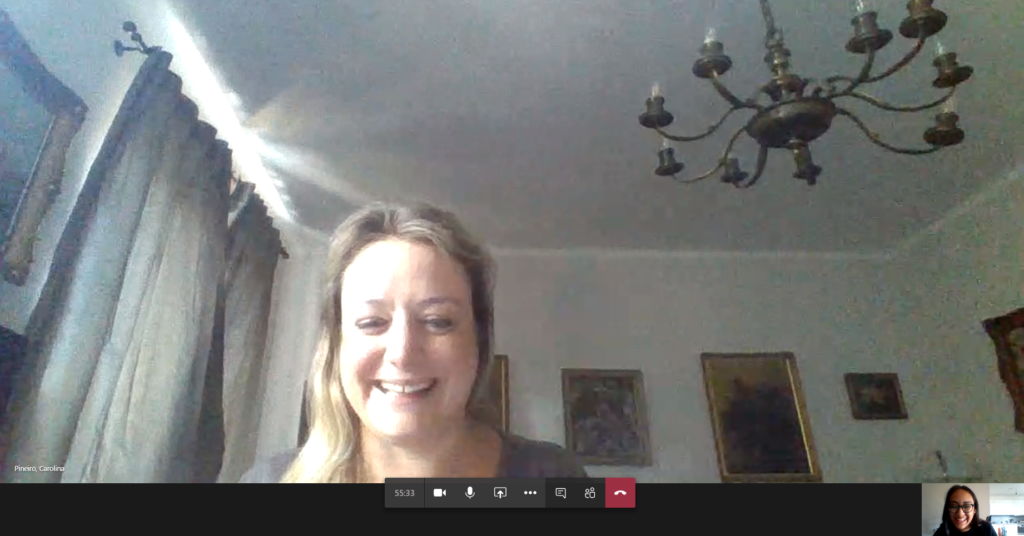 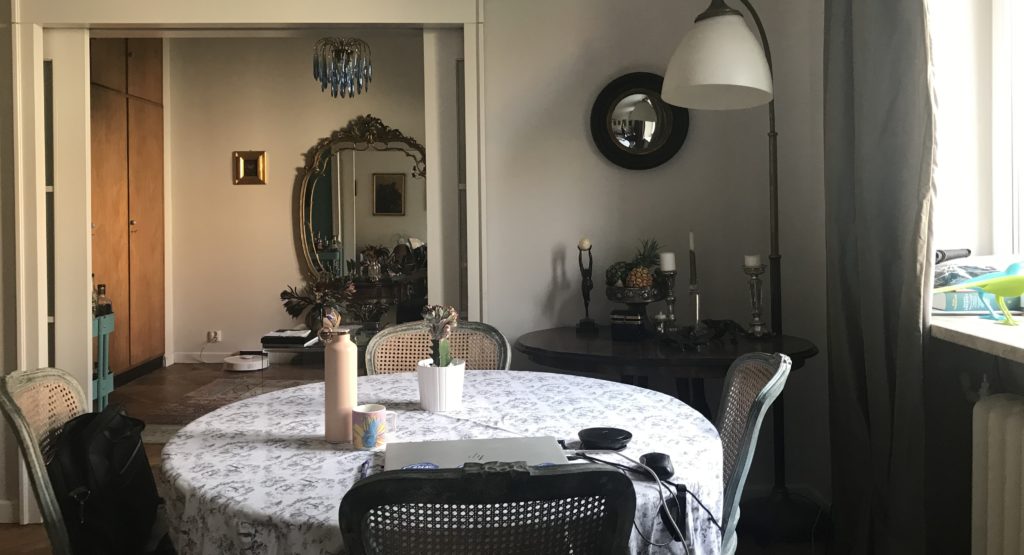 While talking to Carolina Piñeiro, I got to know her charming workplace, her job as a service desk employee and her ability to recognize IKEA furniture in my apartment.

Carolina, who is from Colombia but lives and works in Poland, told me that she has never had so much contact with her family as during the pandemic thanks to frequent meetings that they had online. “We were used to the distance, but by locking ourselves in our homes, we realized how important human contact is,” she explains.

Working from home leads to a better work-life balance

This may not come as a surprise, but it is still an important aspect. Jennie is grateful for the time she has gained for her hobby as an illustrator. “By working from home, I have gained more time for drawing, crafting and photography, as I save time traveling to work,” she says. “My stress level has decreased significantly, not only because I can concentrate and plan better, but also because I can quickly switch to my hobby in the evening.” For others, like Andreas, the time saved was invaluable for his family. “We have grown even closer together as a family because we have undertaken many activities together, such as hiking and walking,” he reported. 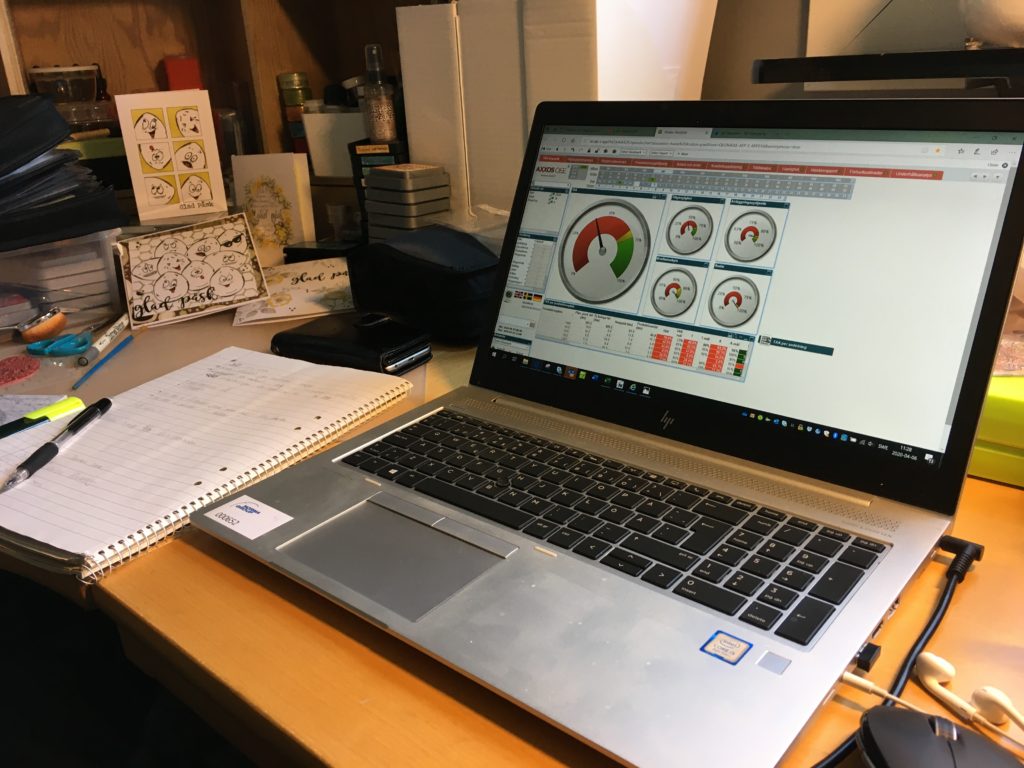 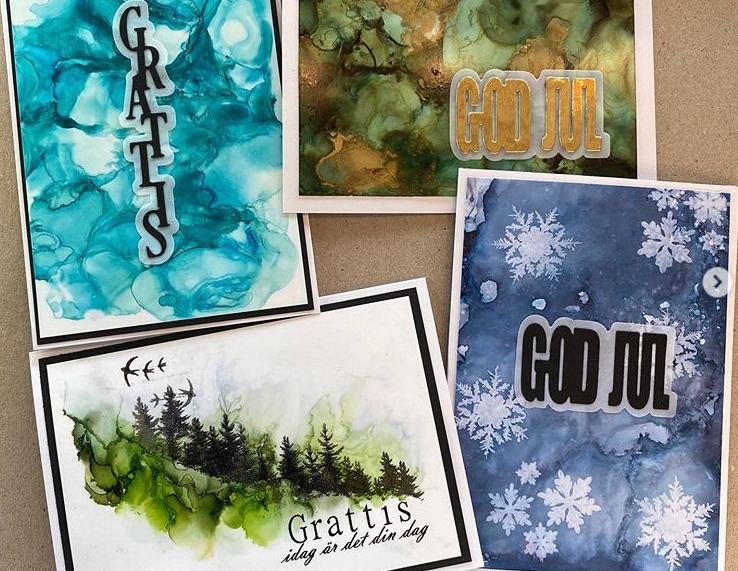 Jennie used the lockdown to pursue her hobby as an illustrator.

A look into the future

“Although the current situation was and still is difficult for many, this is also a great opportunity to optimize various work processes,” notes Andreas Schäfer. “We have seen that working from home works out well. Of course, only if the appropriate framework conditions are in place. We have introduced new routines and are now all working a little differently. My team even likes this situation better and would like to continue working like this.”

For Jason Quek, employee communication has become even more important during the corona pandemic. “As we continue to remain efficient working together remotely, what is and will be more important are interpersonal relationships and trust within and between teams. While people’s basic motivation and interaction needs remain more timely, effective and transparent in communication will steer employee engagement and participation in the right direction.”

Carolina Piñeiro is thinking more about the future of office space. “I’m sure that more people will work from their home offices, even when the pandemic is over. This will lead to a reduction in office space in the various companies and make it necessary to implement a rotation of employees for the use of office space.”

“The world will not be the same as before the pandemic and that’s good. We will find a new normality in which we can deal with such difficult situations better and identify new benefits,” says Jennie Lundin.

Personally, I have a very positive view of the future, too: it will be more creative, more human and stronger. We will recover from the effects of the pandemic. It is in our nature to reinvent ourselves. I think we will be even more efficient and open to the unknown in the future.