On November 17, 2020, this year's career fair of the University of Applied Sciences Darmstadt took place. In addition to myself, Stephan Mann, Fabio Ghirardi, Hannes Clasen, David Schneider and Daniel Koch participated in the university fair for the third time in a row, representing different departments from Maintal. In 2018, the heating in the fair tents broke down and all colleagues froze and wore down jackets while informing interested students about work and entry possibilities at NORMA Group. At that time, we were very happy that the coffee stand was right next to our booth. Fortunately we were able to improve our fair presentation in 2019 and had our booth right next to the FaSTDa Racing Team. At last year’s career fair, we managed to recruit a student who wrote her bachelor’s thesis in our R&D department.

This year, however, like so many other things, everything was different. Due to COVID-19, the career fair of the Darmstadt University of Applied Sciences did not take place as a face-to-face event but was conducted as an online event. Of course, everyone wondered how this should work! The organizer of the career fair worked together with a young Berlin startup called “Talentspace” that specializes in holding online recruiting events. In a one-hour introduction, the participating companies were given - in a video conference, of course - a demonstration of all the virtual formats that exist during such an online fair. Actually, it was easier than expected!

As with any social media channel, the first step was to create the profiles, i.e. the NORMA company profile, the personal profiles of the participating colleagues and a FAQ. But not only the students had the opportunity to find out more about the participating companies. We, too, were able to view the CVs of all registered students in a LinkedIn-comparable format and get in touch with them in advance.

The 9 sqm booth became a "live booth" and the spontaneous conversations with passing students became "1:1 chats". At the virtual booth, several colleagues and up to four students, who could then ask questions via chat or with camera and microphone, could dial in simultaneously. For those students who could not decide on joining the "live booth", there was the possibility to virtually stay in the background and just listen in.

In this format, there was generally a much smaller crowd than in previous years at the live booth. However, those who dialed into the "live booth" were active and interested in direct exchange with colleagues. Compare to that, the "1:1 chats" were much better attended. Students were able to book these slots into the online trade fair calendar of individual colleagues. The scheduled talks were very popular and comparable to qualitative brief interviews. We are very confident that we have found two applicants who could possibly be employed again next year as working students or master students at NORMA Group.

A special opportunity for the company presentation were the so-called "sessions". Stephan Mann and Daniel Koch e.g. used this format to introduce NORMA Group, focusing on the topic of Foresight Management. Up to 30 students were able to dial into the virtual room for the online presentations, listen and ask questions.

In general, it was a successful virtual event, unfortunately with less audience than at the previous face-to-face career fairs. This could be due to the fact that even the best and most modern technology cannot replace personal contact. We would therefore be very pleased if next year’s fair could take place as a face-to-face event, again. 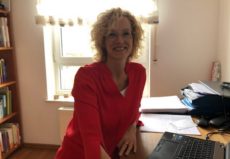 Tips on applying for jobs from an expert

Annette Rebentisch is recruiter at NORMA Group headquarters in Maintal. In this brief interview, she gives tips on the perfect job application and explains the classic recruitment process at NORMA Group.